Forty-one years ago, when I used to get up at 5 a.m. to get on gas
station lines with my parents, I started hearing about “energy
independence” – a secure source of supply for our energy needs. Today,
energy independence soon will be a reality.

For China. Thanks to the Keystone XL pipeline. 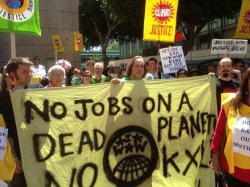 The Chinese economy consists of taking raw materials and energy, making
that into stuff, and then selling that stuff – a/k/a “manufacturing.”
Chinese leaders understand that in order for that model to work, China
needs steady supplies of raw materials and energy. By how do you get a
steady supply of energy, in a world where those supplies are dominated
by a cartel, and are concentrated in a part of the world prone to war?
In America, we’ve been trying to puzzle that out for four decades,
without success.

Well, the Chinese have figured it out. They’re going to get their
energy from Canada, a stable country, and pass it through the United
States, another stable country. They will pay the Canadians the world
price for oil. They will pay us nothing, or next to nothing. So Uncle
Sam is Uncle Sucker.

Now China has peeled off a tiny portion of that trade surplus, just $30
billion, and audaciously is trying to parlay that into permanent energy
independence. China has put that money into Canadian tar sands.

Canadian tar sands are easily one of the dirtiest energy sources on
Planet Earth. Does China care? No. As Deng Xiaoping used to say, “it
doesn’t matter whether a cat is black or white, as long as it catches
mice.” China’s leaders are so indifferent to environmental concerns
that they have no problem with 8-year-olds in Beijing contracting lung
cancer from pollution – but they get upset when the U.S. Embassy in
Beijing puts an air quality monitor on the roof, and posts the readings
on the internet. Canadian tar sands are a very, very black cat, but
China’s leaders care only about catching mice.

Chinese leaders have seized key elements of the world industrial supply
chain, like rare earths. According to our government, they engage in
pervasive industrial espionage. They have threatened American companies
like Apple, Google and Walmart. In short, they know how to play the
game.

All of the oil that passes through the Trans-Alaska Pipeline has to be
sold in the United States. Why not the same rule for the Keystone XL
Pipeline? But instead, we allow a tax-free zone, to facilitate Chinese
energy independence at the expense of our own. Why does Uncle Sam have
to be Uncle Sucker?

There are plenty of reasons to be against the Keystone XL pipeline.
Environmentalists recognize it as the ultimate “bonfire of the vanities”
– planet-wide carbon bonfires. The pipeline passes through an active
earthquake zone. One bad spill could permanently poison the Ogallala
Aquifer, which provides drinking water to millions of people, and 30% of
our irrigation.

Here is another reason, perhaps the best reason of all: It doesn’t do
us any good. China, yes. The Koch Brothers (who own the refining
capacity that would be used), yes. Us, no.

When are we finally going to have a government with the courage to ask that simple question: Does it do us any good? Cui bono?